Jane Wester didn’t work countless hours as editor-in-chief of the DTH last year in order to win any awards. She cared more about documenting UNC’s response to sexual assault cases and making a national championship newspaper that will hang in homes across the state for years. 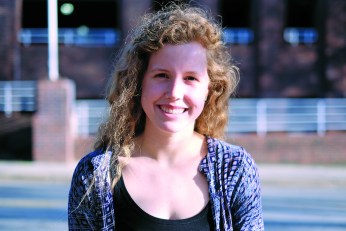 But she was still excited in October to learn The Daily Tar Heel had won a Newspaper Pacemaker for the 2016-17 school year from the Associated Collegiate Press. It was the newsroom’s third Pacemaker in three years, and 14th overall. Wester, a public safety reporter at the Charlotte Observer, answered a few questions about the win and what she remembers about her time as editor.

Where were you when you heard the news, and what was your reaction?

My former managing editor (and now roommate) Hannah Smoot and I were just pulling up to a Halloween party when Erica texted us with the news. I think the most important kind of reward for good journalism is changing someone’s life or fixing harmful policies rather than an award, but we’re excited that the streak of DTH Pacemakers will continue.

What are the best memories you have from your time as editor?

During my editor year we had a national championship and a presidential election, and Obama came to campus.

In between all of that, we had the extreme levels of effort for ordinary stories that makes the DTH so special, I think — the reporters who fight to be allowed inside open meetings or wait in the rain to talk to a source or drop all their other obligations at a moment’s notice to work on a random story.

Everybody — dozens of people — worked so hard and supported each other along the way and still wanted to hang out and grab Cook Out or go to Linda’s after work, even though we spent so many hours in each other’s faces at the office.

What was it like to be EIC during a national championship run?

Oh, my gosh, it was crazy, and crazy in the kind of way that you don’t fully process for a few months.

I remember watching the game at the office and running to Franklin Street briefly, because the editors who stayed in Chapel Hill got to be normal students until the sports team finished their interviews after the game. At about 1 a.m. an acquaintance texted me and asked me to save him a paper tomorrow, and I remember thinking “Sure, I guess, that’s a weird thing to ask,” because we’d been semi-aggressively passing out papers the past few days during the Final Four run, and it definitely hadn’t been hard to get a copy. That was about to change.

We built the paper, which was of course a huge project shared by the sports and photo and design teams, and the last of us went home at 5 or 5:30 and grabbed a little less than an hour of sleep, because we had promised to help hand out papers at the office starting at 7. I drove up about 10 minutes early and there was a line of people stretching down Rosemary, who were, much to my surprise, waiting for a DTH.

The next several days were a mad scramble of counting one-dollar bills and answering the phone, which never stopped ringing, and handing out papers and trying to make the whole process somewhat fair when we suddenly owned the most desirable paper in the country. When the team came home, we had to move several thousand papers down to the Dean Dome really fast and formed a human chain to do it. Newsprint is heavy.

Everybody who worked for the DTH was so willing to quit their normal reporting jobs for a few days and dive into all this hard, sweaty physical labor and customer service. We pretty much lived and breathed nothing else for a few days, which was fine, because we won a national championship. Nobody wanted to come down from that.

I do remember checking Instagram that morning and seeing a lot of DTHers sharing the front page, which is somewhat normal on a big news day, and then logging back in a few hours later and seeing just absolutely everyone I knew posting their own pictures of the DTH and bragging about how they had finally found a copy. That was super cool.