Here’s something to agree on this divisive election season: it’s always best to read campaign stories written by DTH alumni.

Alumni from all areas of journalism and news outlets great and small are covering the 2016 elections. Three reporters, representing a wire service, an online news company and a large metro, share what it’s like when things stop being polite and start getting real. 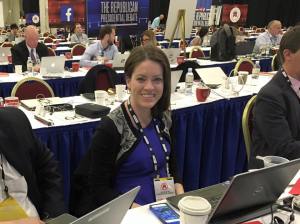 Emily spends one week at a time on the road following the Trump campaign.

Emily and one colleague alternate weeks following the Donald Trump campaign. On a typical Monday, Emily travels from Washington, D.C. to Teterboro Airport, meets with other reporters from the New York market, boards a plane (not Trump’s) and follows the campaign to its destination. “When I’m on the trail with them, it’s a lot of responding to what’s happening to them that day.”

On her days back in D.C., Emily might draft the day’s main political story or work on longer-term stories and appear on ReutersTV. Whether home or traveling, she’s often on Twitter, Facebook and blogging for work.

How her coverage differs:

“Reuters this year decided that rather than cover a lot of the daily news that we were going to try to do more longer-term, enterprise stuff. We’re still sort of trying to do that, but … now we have to cover almost everything that’s happening for the next couple months.

“We’re just really relentlessly focused on policy stuff at Reuters because of who our readers are. … That’s one way that we’ve been able to do a good job of covering both campaigns. We’re asking a lot of questions that other people aren’t asking.”

Private flights: “Flying on charter planes is amazing. It’s the only way to travel. I would do that all the time if I had the money. You just like, show up with your stuff and you go.” (The news organizations pay for the reporters’ flights – not the candidates). 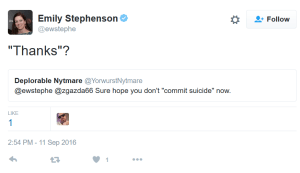 Twitter trolls are a part of campaign coverage in 2016.

Twitter trolls: “I think people who have covered politics or entertainment, those people have kind of gotten used to the troll-y people. … I’m not that used to it, and so it makes me upset. They’re just so bizarre.” (Case in point.)

“During the first presidential debate, my job was fact-checking. By the end, I had a list of examples of things they’d said that weren’t really accurate. Then we had to figure out how to get those fact-checks into our main debate story, even though some of those points were things the candidates have said over and over on the campaign trail and that have been corrected before. We are often dealing with how to balance reporting whatever is new and also not letting candidates get away with saying whatever they want.

“We also have a lot of conversations about what’s really substantive and critical information for voters or our wire subscribers. Focusing on enterprise can be tricky because you hope to do stories that will stick around and be influential. That’s hard to do. And this beat is a lot more competitive than others I’ve had, so it was a real learning process. But that’s why I wanted to cover this campaign.” 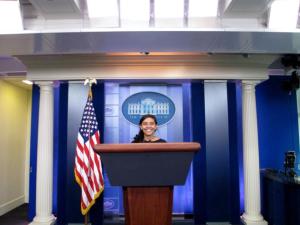 “Technically I’m supposed to cover Capitol Hill, but there hasn’t been much going on the last little while, so I started helping out with the Republican side on the presidential stuff. I also technically cover Senate races. It’s kind of broader than just the election, but obviously the election is kind of all-consuming.”

Tarini rotates with two other reporters covering Trump and is on the road about two days a week. When she’s home in D.C., she focuses on longer-term articles and other stories of interest, like the ground efforts happening in various states, down-ballot impacts or following the money. Tarini produces online posts and cohosts a political podcast, “No One Knows Anything,” while experimenting with video and placing a heavy emphasis on social media.

On being blacklisted by the Trump campaign:

Following an unflattering profile written by BuzzFeed reporter McKay Coppins in 2014, Trump refused to grant credentials to BuzzFeed to cover his events — or even to include the organization’s reporters on his mailing list. At least six other news organizations suffered the same fate.

At first, Tarini and other reporters took turns waiting in line with the public to enter Trump’s rallies, with mixed results. Waiting wasted valuable time but allowed the reporters to mingle with crowds beyond the press pen.

“It was interesting covering the campaign where you don’t have any access. But I think we’ve figured out how to do it, and with this campaign there’s no benefit to having access, is what we’ve learned. … Now he’s dropped the blacklist on everyone, so we are able to be part of the traveling press corps. He hasn’t done an interview with us or anything, and I don’t know if he ever will.”

On covering politics for a news organization better known for listicles, quizzes and memes:

“I think that this election cycle is definitely changing the way people think of BuzzFeed. I’ve noticed that just in the people I’ve talked to.”

“I think it’s changing, just the work that we’ve done in the last few weeks and months. We have former Pulitzer Prize winners on staff and a great investigative staff.”

How the DTH prepared her:

“The DTH helped me with everything I do right now. On Statnat, my first campaign event was covering, I think, a state legislator. I was there on election night when Obama won in 2008, and I went to the state legislature and did some stories there, and covered Obama when he became president. … Some of the sources I talked to back then are still doing political-type things. I’ve still kept in touch with a lot of those people, and they always like hearing about the DTH.”

Why she enjoys it:

“Covering an election from start to finish, given that it’s 2016, I feel like any other cycle there might have been one (surprising) thing, but I feel like this year everything has surprise and shock. The things that you expect aren’t supposed to happen, happen, and you should be prepared for that.

“It’s been amazing to watch this election, which I think people will remember for a long time. This one definitely seems to have changed a lot of things.” 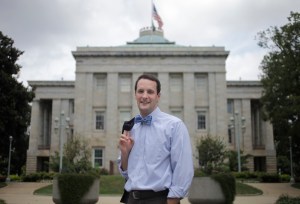 As the election nears the final stretch, John is The Denver Post’s sole political reporter due to a buyout in July 2015 and the loss of a second colleague to another outlet. (Want to join John? The Post is hiring.) By the time he arrives at the office around 8 a.m. Mountain Time, his inbox is already full with news to report. Besides the presidential race, John also covers state politics in the heavily unaffiliated Centennial State.

“Colorado’s a big state, and it’s very politically diverse, so it takes a lot of effort to stay on top of it all. … The largest party in Colorado is no party at all, and that makes things challenging.”

John also covers Colorado’s booming craft beer industry — more important than politics to some readers. “Beer is what makes the politics go down, and this year more than ever.”

John’s covered four campaigns in four states. How this election season differs from others:

“It goes without saying this year is different in terms of the candidates, in terms of the discourse but also in terms of how you’re covering it. The polarization and the really negative atmosphere of the campaign really trickles down to what you see and what you hear.

“There’s such a reflexive mentality for or against someone this year. … I haven’t seen that before, and it means you have to cover things differently. You have to spend a lot more time trying to ferret out the truth.”

Why he enjoys it:

“In college I didn’t want to do politics. I loathed it. I wanted to cover higher ed. But now what I like about politics is kind of three things. One, I like trying to make these politicians into real people, because they are. It’s hard to peel back the layers and find the real person.

“No. 2, I feel like more than anything we need to tell readers why it matters. They’re so disaffected about politics and the press that I spend a lot of my time thinking, ‘Why does this matter? So what? What does this tell us about society in general?’

“Third, I feel like more than ever politicians need to be held accountable for their actions and what they say.

“There’s just not enough of those three things out there, so I’m always continually trying to push in that direction and fight against the scooplet of the day that just dominates political reporting these days.”

How the DTH helped:

“This sounds lame, but it really goes back to the foundations we had at the DTH. That’s where I got into investigative reporting; I didn’t take any investigative reporting classes at the university. The DTH is one of the few college papers that covers politics. We’ve always had political coverage and covered the statehouse, and that’s really special and important.”

Other Alumni Covering the Election

Do you belong on this list? Email kellen.m.short@gmail.com to let us know!