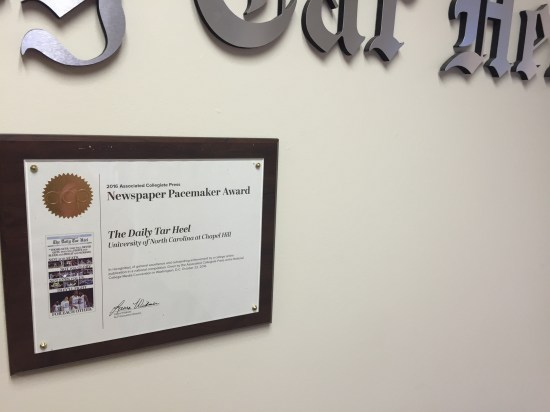 The new Pacemaker back at home.

Sports was one of the biggest stories that The Daily Tar Heel covered in 2015-16 — from continued fallout of the athletic-academic scandal to the basketball team that was one Villanova basket away from the national championship.

So it’s no surprise that the Pacemaker entries for the DTH under Editor-in-Chief Paige Ladisic were heavy on sports, including the hauntingly beautiful “Heartbroken” paper telling the story of that basketball season’s end.

The hard work of the whole school year, including those crazy Final Four weeks, paid off when the DTH won its 13th Newspaper Pacemaker from the Associated Collegiate Press at a ceremony in Washington in October. Budget constraints kept the staff from attending the awards ceremony this year, but the @acpress Twitter handle get everyone updated.

Ladisic said she was in the car waiting for her mom to have a doctor’s appointment, refreshing her Twitter and texting last year’s team.

“I never would’ve thought that winning a Pacemaker this year would mean so much to me,” she said. “I definitely teared up in the car. The papers we entered were products of everything we had.”

When Ladisic looks back at her year as editor-in-chief, she remembers the run-up to the national championship game as an example of the kind of teamwork and camaraderie that can only be found in a newsroom. “Working on the Final Four preview with my entire team, for example, and passing it out on campus all day long was my happiest day as editor-in-chief of The Daily Tar Heel,” she said. “I am so glad that we were rewarded for the sweat and tears that went into it.”

The staff of The Daily Tar Heel and sister publication Southern Neighbor magazine were recognized in the Associated Collegiate Press’ individual awards as well.